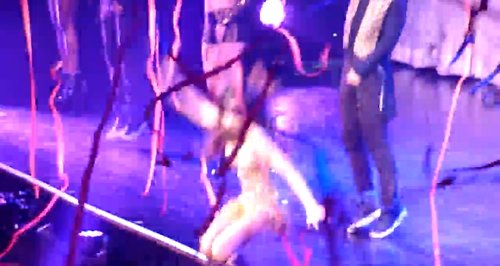 The 'Come And Get It' singer takes a tumble during her show this week.

Selena Gomez was seen falling over on stage during her 'Stars Dance' tour show in Virginia this week.

The US star was performing her track 'Slow Down' when the incident took place.

Selena was coming towards the end of the track, jumping up and down, and lost her footing momentarily.

She fell towards her fans, who grabbed her hand as she made her way back to the top stage.

Watch the moment Selena Gomez falls over on stage in Virginia below:

The pair denied the claims insisting they were simply just good friends.