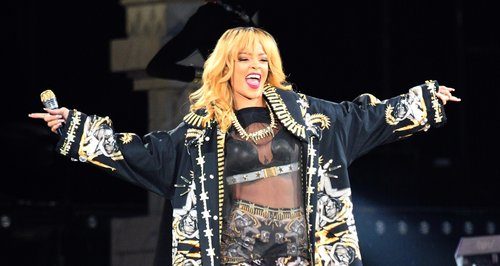 The 'We Found Love' singer was seen apparently attempting to hit out at a member of the audience who was grabbing on to her.

Rihanna was filmed apparently hitting one of her fans with her microphone as they grabbed onto her arm during her 'Diamonds' world tour show in Birmingham.

The 'You Da One' singer was walking at the front of the stage in front of her fans when the incident occurred.

The gig took place earlier this week on 17th June, and had already faced criticism after the singer reportedly arrived on stage two hours late.

Watch the moment Rihanna appears to hit a fan with her microphone in Birmingham below:

Meanwhile, during the singer's stay in the UK, it was reported an intruder was arrested for trespassing on her roof in Los Angeles.

Police are said to be currently holding the unnamed 26 year-old in custody.