Rihanna And Drake Spark Romance Rumours After Clubbing Together In Hollywood 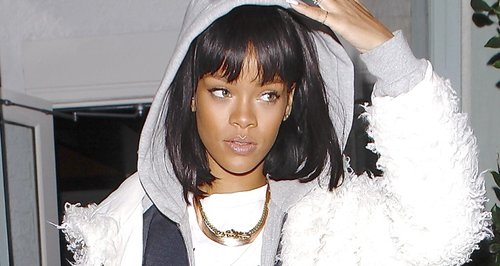 The 'What Now' singer and 'Take Care' star Drake hung out together at a West Hollywood hotspot.

Rihanna and Drake are facing fresh rumours of a romance after reportedly leaving a Los Angeles club in the same taxi together over the weekend.

The 'Monster' singer and Canadian star Drake both met up at Hooray Henry's nightclub in West Hollywood on Friday evening (7th February), after being pictured entering at different times.

Check out a picture of Rihanna and Drake leaving the same restaurant in Hollywood over the weekend below (Credit: Splash):

According to E! Online the pair sat at Drake's private table where they looked "happy together" and "very cute", before leaving the club via different exits.

However, the Mail Online says bystanders saw the pop pair stepping into the same taxi together soon after their sneaky exit.

Last week Rihanna opened up about her body image and says she often finds flaws in herself and wishes she had a bigger bum.

Rihanna is now working on her eighth studio album, the follow-up to 2012's 'Unapologetic'.