The 'We Found Love' singer spent time with the new mother after her show in California.

The singer's stop off in Anaheim, California was watched by the fiancé of rapper Wiz Khalfia.

The pair hung out together backstage, with the Bajan star complimenting the polka dot look of her close friend.

She wrote: "Bad galz do it well! Miss @darealamberrose came thru and shut down backstage in this sick polka dot…"

There was equal praise from Amber to the 'Talk That Talk' star.

She added: "Chilled wit tha baddest b*** badgalriri after her show tonight she killed it as usual ;-)." 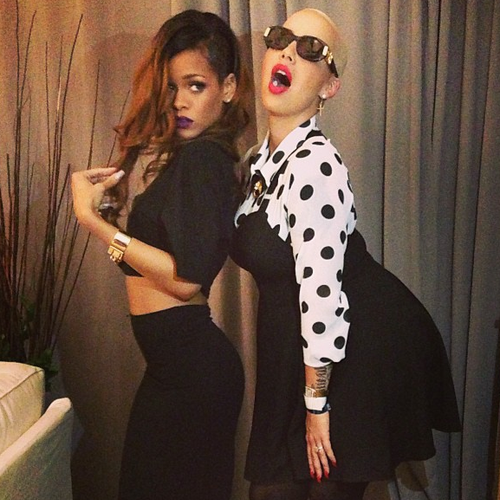 The 'You Da One' singer has also seemingly answered speculation that she has split from Chris Brown by posting a picture of the pair together.

Meanwhile, Rihanna will bring her latest tour over to the UK this summer and is also set to perform at the T In The Park Festival 2013.