Pink To Perform At Oscars 2014 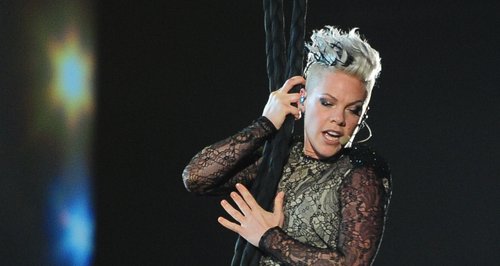 The 'Just Give Me A Reason' joins a star-studded performers line-up for this weekend's big night.

Pink has confirmed that she will be performing at the Oscars 2014.

The 86th Academy Awards take place live on Sunday night (2nd March) with the likes of U2, Pharrell and Bette Midler also set to take to the stage.

Big news!!! I'd like to thank @TheAcademy for inviting me to perform on the #Oscars on March 2nd!! #holycow

The announcement was made on Twitter by the US star who thanked the Academy for inviting her down.

Host of this year's Oscars, Ellen DeGeneres, also revealed her excitement at the news and said although she didn't know what song was to be performed, she was preparing by bringing a safety net.

Last year, the show was stolen by Adele who gave a memorable performance of her Oscar winning song 'Skyfall' during a special James Bond segment.

Big news! @Pink is performing at the #Oscars! I don't know what she has planned, but I'm bringing my safety net just in case.

This year's awards will see the likes of Wolf Of Wall Street, 12 Years A Slave, American Hustle and Gravity all going for the coveted Best Picture prize.