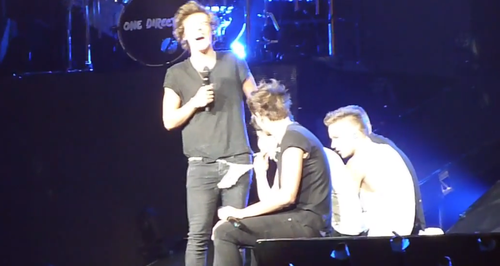 The 'Little Things' singers starts laughing as the boys play around on stage.

One Direction's Zayn Malik can be seen eating a candy thong that bandmate Harry Styles is wearing during their 'Take Me Home' tour show in Ohio this week.

The item gets thrown on stage and handed to Harry -who starts opening the bag to reveal what's inside.

As soon as the 19 year-old star puts the item on – the audience goes wild and he offers Zayn to take a nibble of one of the sweets.

Niall then also goes on to thank the group's fans for their continued support.

Watch Zayn and Harry playing around with the candy underwear on stage below:

Meanwhile, One Direction recently announced details of their first ever stadium tour.

The group will play several of the biggest venues in the UK next year – including London's Wembley Stadium.