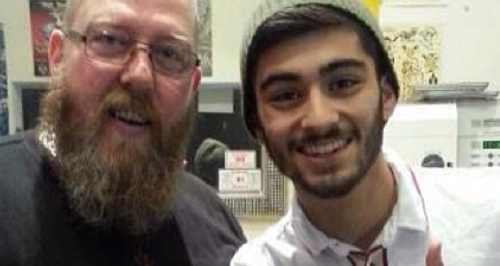 The 'Live While We're Young' singer has had a new design inked onto his right arm.

One Direction star Zayn Malik had a brand new tattoo added to his collection last week during a New Year's break on the South Coast with girlfriend Perrie Edwards from Little Mix.

The 'Story Of My Life' star stopped by Tattoo Magic in Weymouth to complete his sleeve of tattoo artwork on tuesday last week, adding a design of a crying eye that becomes smoke and clouds lower down his arm.

"Perrie's brother Johnnie popped in an hour before to ask if we could fit Zayn in," Tattoo Magic owner Paul O'Connor revealed to the Bournemouth news. "When Zayn arrived we had to lock the door because lat time there was a crowd of screaming girls outside who kept coming in.

"There were just two girls stood outside this time, they saw him come in and waited until he left," he explained. "He was relaxed and talkative.

"He said he and Perrie had a quiet New Year but he had a busy year ahead," he added.

One Direction kick off a new stadium tour of the UK this Spring.