One Direction Launch US Tour After Teasing Fans With Soundcheck Picture

The 'One Thing' singers performed the first date of the US tour this week in Connecticut.

One Direction kicked off their first ever headline tour of North America last night (22nd May).

The 'Gotta Be You' singers took to the stage at the Mohegan Sun Arena in Uncasville, Connecticut yesterday for the first night of the 26-date jaunt, and shared a picture of their soundcheck while getting ready for the highly anticipated tour launch.

"Are you ready Mohegan? Not too long now! Make it loud, just getting dressed now!" band member Niall Horan tweeted ahead of the performance, while One Direction tweeted as a while: "Soundchecking for first show! 1D HQ x."

The 'What Makes You Beautiful' singers were pictures arriving into America on Monday, having only returned to the UK last week after working on their second studio album in Sweden.

One Direction's US tour is set to continue tomorrow night (24th May) with a show at the Patriot Center in Fairfax, Virginia.

View a picture of One Direction sound-checking in below (Credit: Twitter): 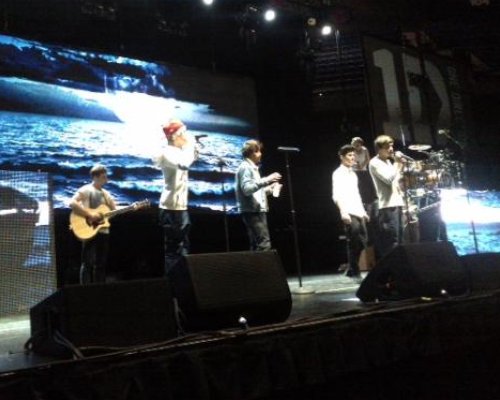