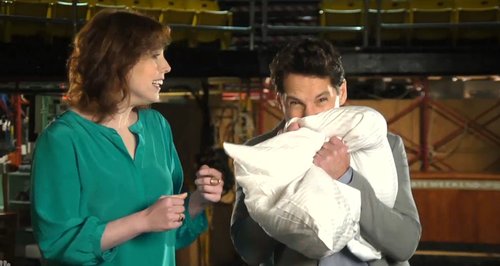 The 'Little Things' stars will be special guest performers on this weekend's show.

One Direction are set to perform on Saturday Night Live this weekend and The Anchorman 2 star Paul Rudd can't contain his excitement.

The Hollywood star can be seen in a new promo for the episode completely "fangirling" when he discovers who is on the show with him.

Paul stands beside Vanessa Bayer and ends up screaming into a pillow as he fails to contain his excitement.

It will be the second time One Direction perform on the show and comes during the week their new album 'Midnight Memories' went straight to the top of the Billboard 200 chart.

The new feat also marks a piece of history as One Direction become the first group to debut at the top of the charts with their first three albums.