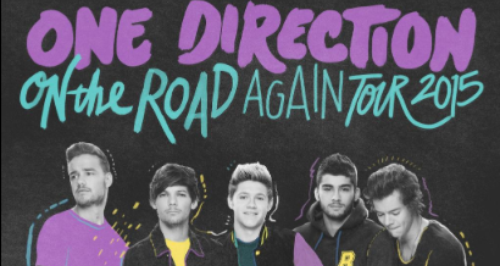 One Direction have revealed their new stadium tour ‘On The Road Again’ 2015 including European dates.

Those One Direction boys just never stop, do they?! They have just announced their next world stadium tour – though UK dates have yet to be announced.

The new tour, called the ‘On The Road Again’ 2015 stadium tour is confirmed to visit Australia, Japan, South East Asia and now Belgium, Denmark, Norway, Sweden and Finland so far.

The tour will be in support of the band’s new album, ‘Four’ and despite the boys having only just finished their last world tour, they are excited to hit the road again.

1D are excited to announce added USA & European dates to the 'On The Road Again 2015' Tour! http://t.co/7l8Ls5ZCIm pic.twitter.com/PVMBNia78R

Niall Horan said, “We could not be more excited about the new tour. We’ve started rehearsing songs from the new album and can’t wait for the fans to hear them live."

"We’re just so very thankful to our amazingly loyal fans - they make it possible for us to play in these incredible places and continue to surprise us every day with their unwavering support.”

The tour will kick off on 10th June 2015 in Vienna and will be in Europe until 27th June when it reaches Helsinki, before beginning the American leg on 9th July.

The European tour dates so far are:

‘Four’ will be released on 17th November.