The 'Little Things' star was among the guest who braved the wintery conditions of the ceremony.

The 'What Makes You Beautiful' singer was among the guests who braved the cold and the snow at St Michael's Church in Castletown Geoghegan in County Westmeath.

The boy band star was best man for the ceremony and waved to fans and photographers as he arrived at the church sporting a dark grey suit and pink striped tie.

His brother Greg tied the knot with Denise Kelly and the bride and groom were in high spirits as they left the venue.

Niall jetted in to attend the big day as the band take a few days off from their 'Take Me Home' world tour.

Check out a picture of Niall at his brother's wedding below: (Picture: Wenn) 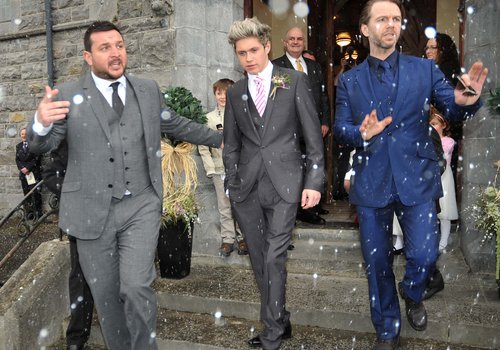 The group will head to Liverpool's Echo Arena on 31st March to continue the outing and head across to the US this summer.

Meanwhile, the band are also preparing to release their debut 3D concert movie in August.