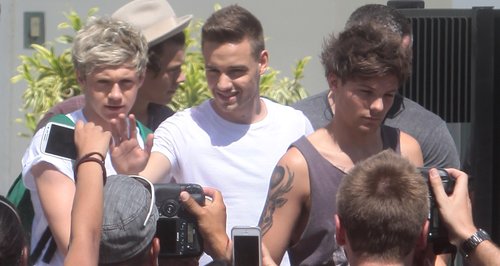 The 'Little Things' band were enjoying a day of filming on set out in Florida this week for an unknown video.

One Direction have been spotted out in Miami in the US shooting their brand new secret music video.

The 'Live While We're Young' five-piece had have a non-stop touring schedule in North America for the past few weeks, but took some time out to begin shooting their new video on Thursday (13th June).

Harry Styles, Liam Payne, Niall Horan, Louis Tomlinson and Zayn Malik were pictured heading to Temple House Studios in Miami, Florida in the day for the second day of shooting on the new promo.

Later in the day the UK boy band stars headed to the BankAtlantic Center in Sunrise, Florida for another show on their 'Take Me Home' world tour.

Check out a picture of Harry Styles while meeting fans on the video set in Miami below (Credit: Getty):

See a picture of Zayn Malik out in Miami with his bandmates below (Credit: Getty):

This week saw the band announce a new partnership with Office Depot to launch a campaign combatting bullying in schools, by lending their names to a new range of stationery.

One Direction have also been working on new music out in America for their third studio album, after being seen heading to a recording studio in the country.