The Boss Is Happy! Simon Cowell Says One Direction's New Album Is "Fantastic" 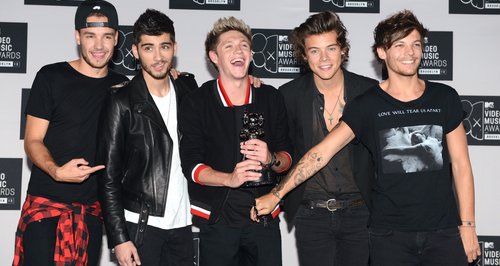 The Syco boss says the boys have already come up with five or six potential new singles.

Get ready for something VERY special Directioners… Simon Cowell's heard the new One Direction album and says it's "fantastic"!

The 'You & I' five-piece have been quietly working away on their fourth record for some time now, and it looks like the boss is more than happy with what the boys have come up with.

"There's some very different kinds of songs than what we've done before, they've taken a few more risks," he explained. 'Most importantly, the boys love writing, they love recording.

"I went on Twitter recently to say I don't think they're going to split up, they're having too good a time!" he added. "I think they could be doing this five, ten, twenty years if they wanted to!"

Rumour has it the album will be dropping before the end of this year… are you ready for the boys' return?

> One Direction's New Album: What To Expect

> Find Out How One Direction Can Make You Live LONGER!