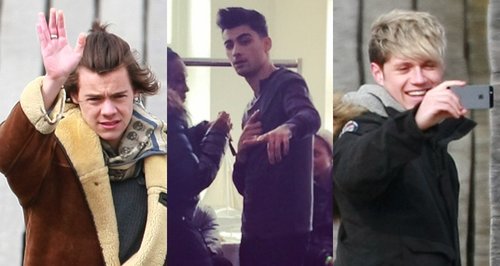 The Directioners have been tweeting all day to guess which track is getting the music video treatment next.

One Direction confirmed this week that they have been shooting a brand new music video out in Somerset this week, with fans quickly taking to Twitter to speculate about which song it will be for.

> See what 1D have been getting up to on their new video shoot.

Fans have suggested 'Midnight Memories' album tracks like 'Diana', 'You And It' and 'Don't Forget Where You Belong' as potential choices for the new video, while many are pointing at 'Through The Dark' as the most likely song for the video treatment.

Other fans have also tweeted to suggest it could be a brand new song that doesn't feature on 'Midnight Memories', either for a film soundtrack or as an early preview for the boys' next record.

See what One Direction fans on Twitter are saying this week about the brand NEW 1D music video:

1. This Directioner seems dead certain the band are shooting a promo for album track 'Through The Dark'.

3. Some fans are only just picking up on the new that Harry, Zayn, Niall, Louis and Liam have been on their secret shoot this week...

What music video are One Direction shooting!? What song!? Why am I only seeing this now.. Fml!

4. This One Direction supporter is hoping fan-favourite track 'You & I' is the video in question

all directioner eagerly awaiting the video of you & I....I you guys.... @onedirection

5. Which track do you think the band are shooting their music video for?

@onedirection what music video are you doing next? Diana? You and I?

7. Other fans don't seem to mind which song it's for… they're just excited to see the finished video!

8. Of course, in true Directioner style, the excitement levels are VERY high

If really One Direction are working on the video of "You and I" I can just start counting days 'til the end of my life. Keep calm.

9. The One Direction boys must be loving the suspense about what they're working on out in sleepy Somerset

@CapitalOfficial don't forget where you belong 10000%

10. Come on boys... put the fans out of their misery already