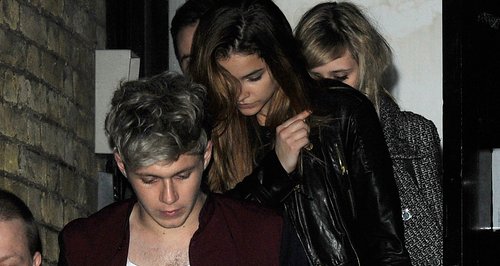 The 'Best Song Ever' star was spotted holding hands with the model at the X Factor finale on Sunday.

One Direction's Niall Horan has sparked rumours he is dating Victoria's Secret model Barbara Palvin after the pair were spotted holding hands over the weekend.

The 'Story Of My Life' singer has been seen out and about several times with the 20 year-old model over the past few weeks, notably at the London premiere of The Class Of '92.

Check out a picture of Niall Horan out with his rumoured new lady below (Credit: Goff):

Niall was then again seen leading Barbara by the hand at the X Factor UK after party at One Marylebone on Sunday evening (15th December).

The Irish singer opted for a simple outfit of white t-shirt, jeans and a brown jacket for the celebratory event, holding the hand of Barbara who was wearing a little black dress.

One Direction performed new song 'Midnight Memories' live at the X Factor final over the weekend.