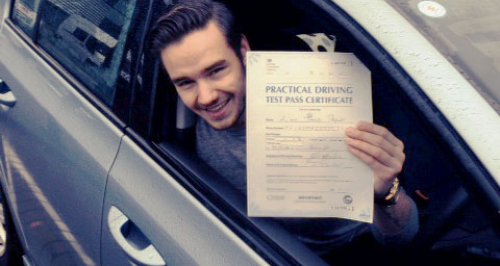 The 'Best Song Ever' singer has been pictured holding up his pass certificate after his test last week.

One Direction's Liam Payne was celebrating over the weekend after passing his driving test on his first try.

The 'Story Of My Life' singer underwent an intensive driving course to prepare for his big test, and passed first time with only one minor to his name

Liam passed on Friday 31st January and the Intensive Courses website has since posted up a snap of the boy band star proudly holding up his pass certificate from the driver's seat.

The same company also passed his fellow band member Niall Horan several months ago, as well as 'Someone Like You' singer Adele.

View a snap of Liam holding up his pass certificate below (Credit: Intensive Courses):

Friday also saw One Direction unveil the official music video for 'Midnight Memories', their third single from their album of the same name.

One Direction were named the top global recording artist for 2013 last week.