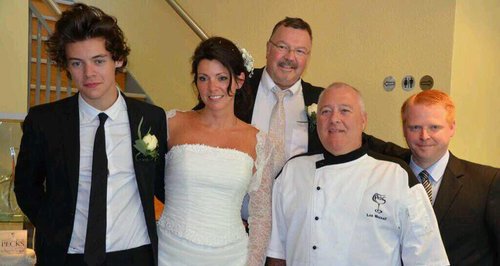 The 'Kiss You' singer walked his mum down the aisle at her wedding to his step-dad Robin Twist.

One Direction star Harry Styles was spotted looking dressed up smart in new pictures from his mother's wedding over the weekend.

The 'Live While We're Young' singer opted for a dapper slim-fit black suit for the festivities, where he walked his mum down the aisle and was best man to her new husband Robin Twist.

Harry's stepdad helped raise him from the age of seven after his parents split up, and the boy band star looked in good spirits on Saturday afternoon (1st June) while preparing for the wedding ceremony.

The wedding of Harry's  mum Anne Cox took place in Congleton, Cheshire, not far from the UK singer's hometown of Holmes Chapel, and was timed to fit in with a break on One Direction's 'Take Me Home' UK tour.

The 'Little Things' singers announced the first batch of dates for their 2014 stadium world tour two weeks ago, as well as unveiling a string of extra dates after the first sold-out.

One Direction have also confirmed a release fate of 29th August in the UK for their 3D concert movie This Is Us.

Who Leaves Love Island Tonight? All The Fan Theories