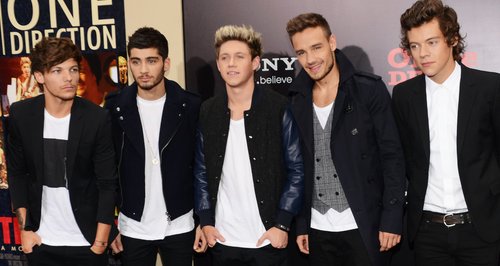 The 'Best Song Ever' five-piece are heavily rumoured to be shortlisted for three awards at next year's event.

One Direction are rumoured to be in the running to be shortlisted for several awards at next year's Golden Globe Awards.

The 'Live While We're Young' five-piece launched their 3D concert movie This Is Us in cinemas over the summer, and fresh reports suggest it stands a good choice of landing a nomination or two at the prestigious film awards show.

According to new sources This Is Us 3D received "positive views" from the panel of the Golden Globes and is now expected to be shortlisted in categories for Best Documentary Feature, Best Original Score and Best Original Song for 'Best Song Ever'.

"The One Direction film was really greeted with positive views," a source close to the Golden Globes told the Daily Star this week. "The story of it and examination of their lives made it interesting and the songs will definitely be shortlisted.