FOUR YEARS Of One Direction? Yep... Niall Can't Believe It Either! 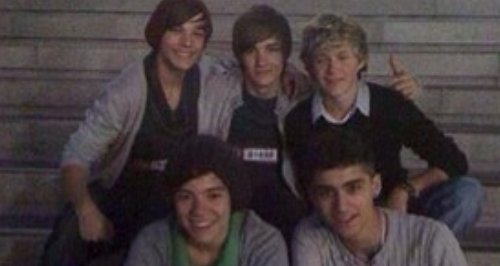 See the best fan memories of the boys as Twitter marks #FourYearsOfOneDirection.

Can you believe it's been FOUR years since the world first hear of One Direction?

The #Directioners are enjoying a day of celebration today (23rd July) and they've basically taken over Twitter in tribute to their five favourite chaps.

It also looks like the 1D boys themselves are in a celebratory mood and feeling VERY thankful to their millions of fans around the world.

"Wow! Can't believe it! 4 years ago today we were put together!' Niall tweeted in response to multiple fan trends. "Crazy how time flies but it also feels like it was years and years ago.

"I can honestly say, thank you all so much, every one of you, fro mall over the world! Your support is absolutely incredible," he added. "What you have done for us baffles my mind every day! Really appreciated it! Thank you, love you! Let's have more fun now #4YearsOf1D."

Wow ! Can't believe it! 4 years ago today we were out together ! Crazy how time flies but it also feels like it was years and years ago !

I can honestly say, thank you all so much, every one of you, from all over the world! Your support is absolutely incredible.

What you have done for us baffles my mind ever day! really appreciate everything ! Thank you , love you! Let's have more fun now #4YearsOf1D

Thank you lads ,we've had a great time so far, you are family to me now , not just band mates ! Love you pic.twitter.com/IdUHD3vFnf

Fans have been tweeting their support for the 'You & I' stars all day, getting three of the top trends in the world using #4YearsOfOneDirection, #HowIHeardAbout1D and #ThankYou1DYouChangedOurLives to share their memories from the past four years.

I'm so proud of these boys and everything they have achieved.Never thought they would make a huge impact in my life #4YearsOfOneDirection

IF ZAYN DID NOT GET OUT OF BED TODAY FOUR YEARS AGO I DON'T KNOW HOW TO FEEL #4YearsOfOneDirection pic.twitter.com/ZlKNYYz4HP

SO MANY MEMORIES SO MANY YEARS SO MANY PEOPLE SO MANY TEARS #ThankYou1DYouChangedOurLives #4YearsOfOneDirection pic.twitter.com/YfHCrh0XKy

Zayn Malik, always a man of few words (!), simply chose to post this drawing to celebrate the big anniversary:

> WATCH: One Direction's NEW 'You & I' Fragrance Trailer!

> 11 Things To Expect From One Direction's Fourth Studio Album.

> 22 Baby Pictures Of The One Direction Boys You Won't Forget.