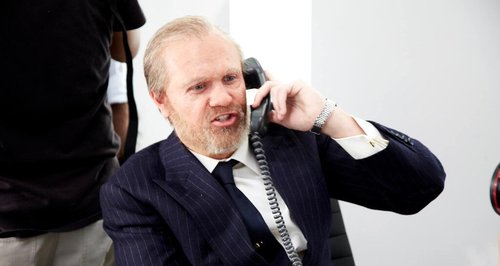 The clip features Niall Horan dressed as an old studio executive as fans get their first taste of the promo.

One Direction have released the first official teaser trailer to their upcoming music video for new single 'Best Song Ever'.

The track is the first to be taken from their new third studio album and will coincide in the run-up to the release of their first ever movie This Is Us.

Niall can be seen getting his transformation into "Harvey - The Studio Exec" in the footage and yells "Will Smith? Tell him I'll call him back,"

The clip comes shortly after they posted a 20 second clip of the song alongside the lyrics to the chorus of the track.

Check out the teaser clip for One Direction's 'Best Song Ever' music video below:

One Direction will release new single 'Best Song Ever' on 22nd July with their 3D movie hitting cinema screens on 29th August.

The boys are currently on the road with their 'Take Me Home' world tour and head on their first stadium outing in 2014 – performing at the likes of Wembley Stadium in London.