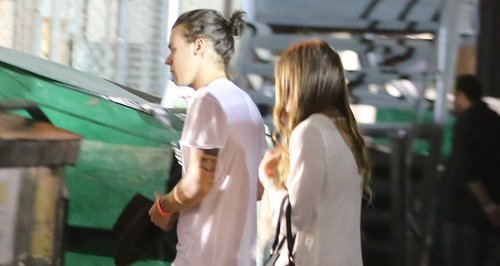 The One Direction star has been spotted out with a new lady – could there be a new relationship in store for Harry Styles?

Harry Styles is one of the world’s most eligible bachelors – so it’s no wonder he has women queuing up for a night out with him!

Harry was spotted on what appears to be a date with Nickelodeon actress Daniella Monet – even though she is five years older than the 1D hunk!

Harry and Daniella were spotted together at a VIP Coldplay concert at LA’s Ace Hotel last night and she was also seen at One Direction’s concert earlier this week.

As well as bagging himself a hot date to the gig, Harry even got namechecked by Coldplay frontman Chris Martin on stage, as he introduced their song ‘Midnight’, “This is for our young friend Harry - wherever you are.”

And Harry and Daniella weren’t the only famous faces who snuck along to the VIP gig – Chris’ rumoured girlfriend Jennifer Lawrence was also snapped leaving the gig, trying to hide her face from the paps.

Maroon 5’s Adam Levine, Muse’s Matt Bellamy and John Newman were also in the audience for the intimate gig – sounds like an AMAZING crowd!