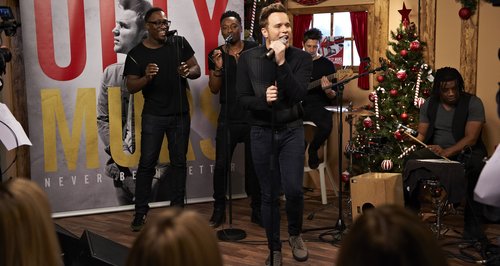 The hip-shaking Essex lovely is releasing a free EP with Google Play Music including some of his repackaged album tracks and 'I Wish It Could Be Christmas Everyday'.

Christmas has come early for the Murs Army – Olly Murs is releasing a free EP with Google Play Music AND there is an exclusive Christmas song on there too!

Olly’s ‘Unwrapped’ EP will feature Olly’s new song ‘Wrapped Up’, ‘History’ from his new album ‘Never Been Better’, ‘Toublemaker’ and ‘Dear Darlin’’ from his last album as well as ‘I Wish It Could Be Christmas Everyday’.

‘Unwrapped’, which was recorded in front of an audience of fans at the Youtube Studios, will be released on Friday 12th December and will be available to download and stream for free exclusively through the Google Play Music store.

Olly recorded the five tracks for the EP in front of an intimate group of twenty lucky fans, and said, “I'm delighted to be recording this EP for Google. I've recorded ‘I Wish It Could Be Christmas Everyday’, which is one of my favourite Christmas songs, and I really enjoyed doing an acoustic version of this with my band.”

“There are so many good Christmas songs I could have picked, but this is a classic - I hope everyone likes it! I've also got acoustic versions of my last single 'Wrapped Up' and some 'Classic Murs' thrown in there too!”