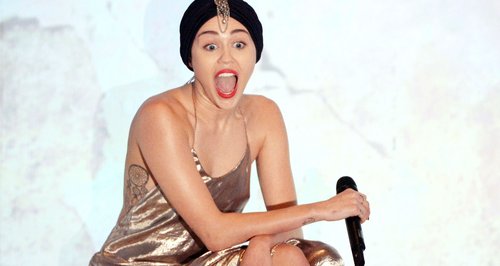 The US star performed on top of a giant sand dune on the reality show on Sunday.

Miley Cyrus wowed fans with a live performance of 'Wrecking Ball' on The X Factor UK over the weekend.

The 'We Can't Stop' singer stopped by the TV show on Sunday (17th November) for a performance of her recent hit single, taken from Miley's recent album 'Bangerz'.

Miley covered up for the performance despite a recent string of controversial stage outfits, wearing a demure gold Marc Jacobs dress and a black turban.

The US star started off her 'Wrecking Ball' sat on top of a giant sand dune in the centre of the stage before heading out to the front to showcase her vocals for the performance.

Miley Cyrus is set to kick off her 'Bangerz' world tour with a performance on 14th February 2014 in Vancouver.

See Miley Cyrus asking fans to pick her next single below: