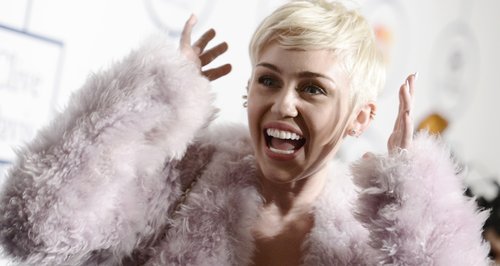 The 'Wrecking Ball' star says she doesn't understand where all the boyfriend rumours are coming from.

Miley Cyrus has denied recent tabloid speculation that she is in a relationship and insists she is still single.

The 'We Can't Stop' singer split from former fiancé Liam Hemsworth in 2013, and has faced constant reports of new romances over the past few months.

"If I was actually getting as many hot guys as they try to make it seem like, I'd be super stoked," Miley revealed on Extra this week. "But I'm definitely not.

> Find out what to expect on Miley's 'Bangerz' tour!

"I'm like, 'Why do I have all of these boyfriends yet I don't have a boyfriend at all?'" Miley questioned.

The US star then went on to described her ideal man to host Mario Lopez, and joking that she wants a relationship based around texting.

"I need someone that doesn't really want to see me in person, and someone that just likes to FaceTime," she joked. "Texting relationships are the best, I love long –distance."

Miley Cyrus kicks off her 'Bangerz' world tour on Valentine's Day this week (14th February), which arrives in the UK on 6th May.

How Long Were Pam & Tommy Married, How Old Are Their Kids & When Did They Split?