New Romance Alert! Has Miley Cyrus Been Secretly Dating Producer Mike Will Made It?! 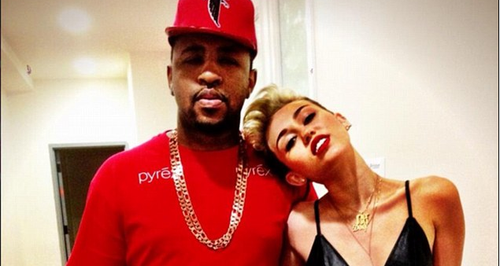 They’ve been working closely together on her ‘Bangerz’ album, but has Miley Cyrus been in a secret relationship with Mike Will Made It for NINE months?!

Erm, Miley… Is there something you’ve not been telling us?! The singer has reportedly been in a relationship with producer Mike Will Made It for nine whole months!

Mike Will was the executive producer for Miley’s Bangerz album, and it seems the pair have been making more than just sweet music together! A source close to Miley told US Weekly, “Everybody in her circle knows they've been together this whole time. They talk and text all day, every day.”

Mike Will – real name Michael Williams – is four years older than Miley at 25 and the pair are ‘pretty serious’. It seems he’s even got the family’s approval as the source claimed, “Tish [Cyrus] says he's part of the family!”

While the pair have probably had to cope with a long distance relationship in recent months with Miley on tour, they are now enjoying spending more time together as she currently has a five-week break in her tour.

The rumours about Miley and Mike were heightened after the BET Awards last month as the rumoured couple were reportedly spotted ‘all over each other’ in the lift of the W Hotel. The pair were also first spotted looking cosy back in September of last year while at a festival in Las Vegas, just a couple of weeks before se was spotted ‘grinding all over him and kissing his neck’ at her ‘Bangerz’ album launch party.

Miley has publicly been single since she split with her fiancé, Liam Hemsworth, last September after four years together, but it seems there is no awkwardness between the pair as he recently said that he and Miley would ‘always be best friends’. N’aww!