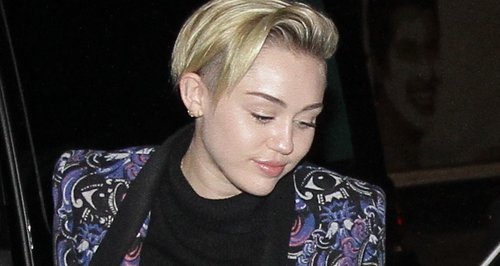 The LMFAO star teases a bit about what fans can expect from the 'We Can't Stop' singer this weekend.

Redfoo has admitted he wan't wait to see what Miley Cyrus has in store for her performance at the MTV EMAs 2013 this Sunday (10th November), in a press conference ahead of the event.

The former LMFAO star will serve as the special EMA's MC at the event on Sunday in Amsterdam, and says 'Wrecking Ball' singer Miley is one of the stars he is most looking forward to seeing take to the stage.

"Miley, of course, is somebody I just want to see what she's going to do," Redfoo revealed at the press conference, when asked which star he is most excited about. "Yesterday, I actually refused to watch her rehearsal.

"I said I didn't even want to see it, even though I'm announcing it," the 'Sorry For Party Rocking' star explained. "I want to be just as shocked, because I'm a fan. And I want to just step back and go, 'Woah!'"

The MTV EMAs 2013 takes place Sunday 10th November live from Amsterdam and will see performances from the likes of Miley Cyrus, Bruno Mars and Katy Perry.

Keep it Capital all evening this Sunday for full coverage of the MTV EMAs winners and performances as and when they happen.