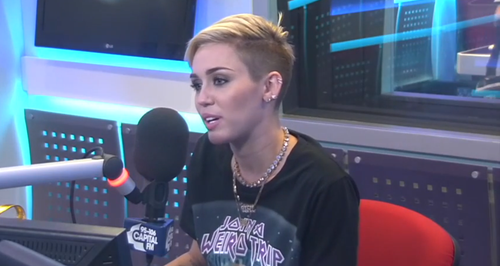 The Black Eyed Peas star returns the favour after the pair previously teamed up for his record '#willpower'.

Miley Cyrus has confirmed that Will.i.am will feature on her forthcoming new studio album.

She previously teamed with the Black Eyed Peas man on his record '#willpower' for the song 'Fall Down'.

The 'Can't Be Tamed' singer told Capitalfm.com that it's great to work with the 'Bang Bang' star because his sound is something different from her own.

"He did a track on my record also and he's dope to work with because he's on some whole different sound than what I'm on," she confessed. "[It's] something new in his own way and I know that over here especially, his music is always going crazy."

The 20 year-old star also praised his work with Britney Spears on 'Scream & Shout' as "insane" and said it's different from fellow collaborator Pharrell – who is also on her album.

Listen to Miley Cyrus speaking to Capitalfm.com about her new album below:

The star has just finished up work on her next record and will release new single 'We Can't Stop' on 4th August.