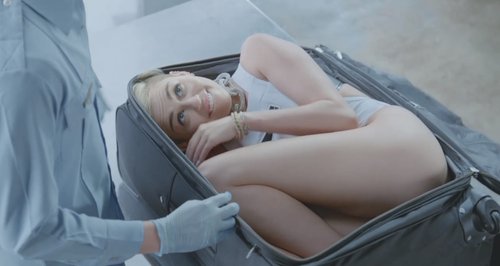 The 'We Can't Stop' singer was recently confirmed to be appearing at next month's show in Amsterdam.

Miley Cyrus can be seen hiding in LMFAO star RedFoo's suitcase during a new promo for this year's MTV Europe Music Awards.

The 'Wrecking Ball' singer was recently named among the latest performers for the event and is fast building added hype for the industry event.

RedFoo can be seen getting his items searched by airport security and even strips off to his famous pants during the scene.

After asking if there was anything else to declare, the suitcase is unzipped and out pops Miley.

Check out a video of the teaser promo for the MTV EMAs 2013 below:

The singer caused controversy when she performed at the VMAs back in September – when she was seen gyrating against Robin Thicke and making gestures with a foam finger.

The MTV EMAs 2013 take place live from the Ziggo Dome in Amsterdam on Sunday 10th November.