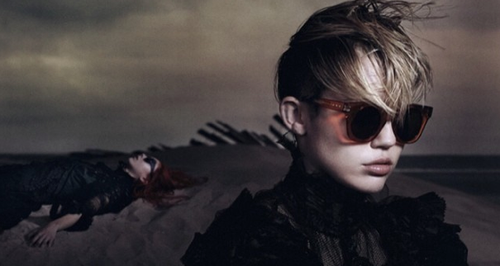 The 'Wrecking Ball' star poses for a series of new shots for the designer's latest range.

Miley Cyrus has been revealed as the new face of Marc Jacobs' new campaign for Spring 2014.

The 'We Can't Stop' singer has posed for a series of new campaign shots for the fashion designer's latest collection, showing off a different side to her personality in the process.

The moody themed shots show Miley posing on a dark beach while looking out seriously into the distance, rocking navy blue jacket and maroon shorts in one of the snaps.

"We wanted this beach with girls kind of sulky and broody and we though it would be cool if it was Miley with what could be two friends, feeling distant and quite dark," Marc revealed to WWD of the concept behind his new campaign.

"We all just love her and her entire being," Marc explained. "Her energy, her talent, her intelligence, everything.

"There's nothing I don't like about her," he added. "She is just genuine and very natural."

Miley Cyrus is currently preparing for the release of her new single 'Adore You'.