Miley Cyrus Raps 'Baby Got Back' During Karaoke Session - Watch 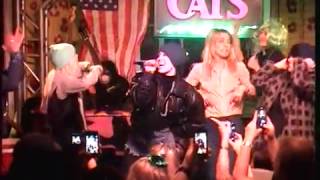 The US star was in high spirits as she hit the New Orleans hotspot with friends this week.

Miley Cyrus was seen showing off her rapping skills as she picked up the mic in a New Orleans karaoke bar to perform Sir Mix-A-Lot's 'Baby Got Back'.

The performance took place at the popular Cats Meow on St. Patrick's Day and saw Miley rocking some black leggings and cut off denim shorts complete with beanie hat.

There's some signature twerking and some spanking during an energetic performance that sees the star struggling to keep a straight face.

Miley is currently on the road with her 'Bangerz' world tour and footage also emerged of one of her tour buses on fire.

No one was hurt during the incident – which was captured by her sister Noah.