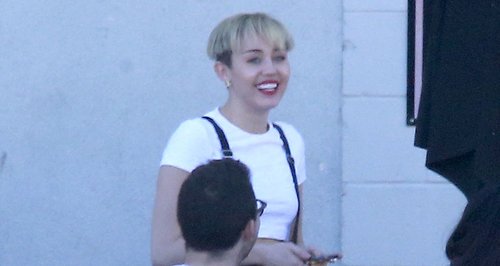 The 'Wrecking Ball' star revealed a unique new look this week in some new pictures.

Miley Cyrus showed off a new bowl cut hairstyle this week while back at a recording studio in Los Angeles.

The 'We Can't Stop' singer was spotted hanging out with several male friends at the studio, while also rocking an unusual new style for her blonde hair.

Miley also added a bit of geek-chic style to her look with a cropped white top, black trousers and braces, while her short blonde hair was styled into a bowl-cut style.

The US star is currently preparing for the release of her new single 'Adore You', from her album 'Bangerz'.

Miley Cyrus has been revealed as the new face of Marc Jacob's Spring fashion campaign.