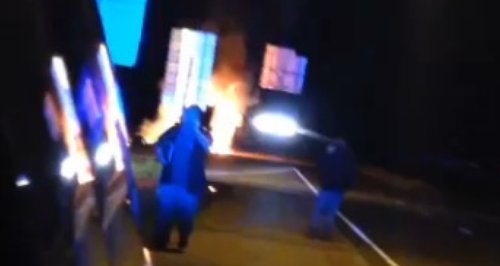 The US star's sister caught the shocking incident on camera during the tour this week.

Miley Cyrus' 'Bangerz' tour suffered a big hit this week when one of the US star's tour buses burnt down on route to their next destination.

The 'Wrecking Ball' star's sister Noah caught footage of the incident, which left one of Miley's 'Bangerz' buses burnt out completely as they travelled from Houston to New Orleans.

"Yes, everyone got out safe no one is injured whatsoever! Everything is ok!!" Noah later tweeted to confirm the news.

Yes, everyone got out safe no one is injured what so ever!! everything is okay!!

Miley Cyrus' 'Bangerz' tour is set to arrive in the UK in May.