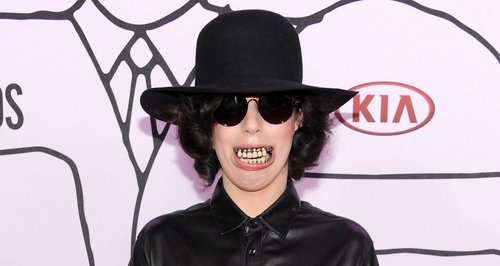 The US star was seen sporting the same accessories as the cover to her latest track.

The track is the latest to be lifted from her forthcoming new album 'ARTPOP' and she also gave a live performance of the song at the event.

The show was broadcast and streamed live from New York City's Pier 36 and saw Gaga seated at a grand piano for the emotional performance of the track.

The 'You & I' singer was teary-eyed as she belted out the lyrics for her track wearing a red flannel shirt and NASA cap.

The performance was shot by the show's artistic director Spike Jonze and fellow director Chris Milk.

Eminem Avicii and Arcade Fire were also among the other live performers on the night.

The Slim Shady' star was also the big winner of the event as he took home the coveted Artist Of The Year prize.