The 'Born This Way' star makes her second appearance on the cover of the fashion magazine wearing Marc Jacobs gown.

Lady Gaga has leaked a picture of her appearance on the cover of the September issue of Vogue.

The 'Born This Way' singer was photographed by Mert & Marcus wearing a fuchsia Marc Jacobs gown for the iconic issue of the fashion magazine.

Lady Gaga debuted the her Vogue cover on her social-networking website Little Monsters, seemingly without the blessing of the magazine's editor-in-chief Anna Wintour.

The September issue of Vogue is the magazine's readers most anticipated edition and was the subject of the 2009 film, The September Issue.

It marks Lady Gaga's second time on the cover – she last appeared on the magazine's March 2011 cover.

Lady Gaga on the September 2012 issue of Vogue magazine: 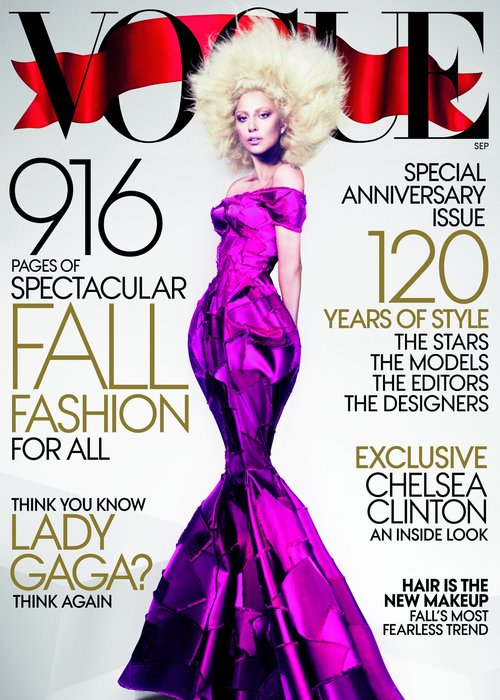 Lady Gaga is currently getting ready to return to the road to embark on the next leg of her 'Born This Way Ball' world tour, which will see the singer play venues across Europe.

The singer revealed recently that her third album will seemingly be called 'ARTPOP'.

The 'You & I' singer described the word 'ARTPOP' as referring to her "new album/project", and has previously promised fans the follow-up to 2011's 'Born This Way' will be out by spring 2013.