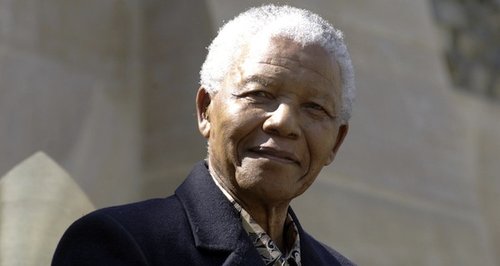 The world continues to mourn the passing of the former South African President who died aged 95 yesterday.

Lady Gaga and Justin Timberlake have added to the millions of tributes to Nelson Mandela after the former South African President died aged 95 yesterday (5th December).

As much of the world wakes up to the sad news this morning, tributes continue to pour in from stars of musical community.

It is such a sad yet beautiful moment that Nelson Mandela has passed. A time to celebrate him & remember his contributions to humankind.

Gaga looked back on Mandela's life and told her fans it was a time to "celebrate" his legacy and the "contributions to humankind".

Justin Timberlake always thanked the anti-apartheid revolutionary for "being the true meaning of compassion" during a touching tribute.

One of our GREATEST leaders... Thank you for BEING the true meaning of compassion. May you be at peace now. #RIPNelsonMandela

The iconic figure had been receiving intensive medical care at home for a lung infection after spending three months in hospital.

The news was broken by current South African President Jacob Zuma on national TV who said: "Our nation has lost its greatest son."

Rihanna, Ed Sheeran, Beyonce, One Direction, The Wanted and more stars from the world have been paying tribute in their own way on Twitter as well as sending their thoughts and prayers to Mandela's family.

Read what some of the other biggest stars in music have been saying on Twitter below:

Nelson Mandela was a true inspiration to all humanity. He will truly be missed.

One of the greatest men who's ever lived!!! #Legend We will never forget the things this man has… http://t.co/ztPkooNOIN

Truly saddened by the death of Nelson Mandela. A great, great man!

Nelson Mandela showed and acted out in front of the world what the true meaning of "fight for what you… http://t.co/sIXngtDWrD