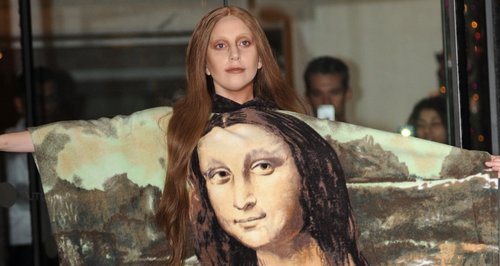 The 'Venus' star has been pictured out meeting her fans in the UK capital ahead of her O2 Arena show.

Lady Gaga has arrived in London this week ready for her performance at the Capital FM Jingle Bell Ball 2013 this weekend, and has already showed off several unique outfits during her stay.

The 'Applause' star landed in the UK capital this week after jetting in from Tokyo, Japan, and was pictured on Tuesday evening (3rd December) wearing a dress emblazoned with the famous Mona Lisa painting by Leonardo Da Vinci.

Then on Wednesday night (4th December) Gaga was snapped leaving the Langham hotel in London in an eye-catching gold dress featuring puffed up sleeves and a matching head-piece.

Check out a picture of Lady Gaga outside her hotel this week in London below:

The US star greeted fans outside the hotel and stopped to take pictures and sign autographs with them, after tweeting: "LONDON MONSTERS I'm gonna bring a leather outside that I want you to ARTPOP decorate. I'll bring the paint pens. Now I can wear u home w me."

Lady Gaga will perform this Sunday (8th December) for the second night of the Capital FM Jingle Bell Ball 2013.

This week she officially announced her new world tour called the 'ArtRave: The ARTPOP Ball' tour.