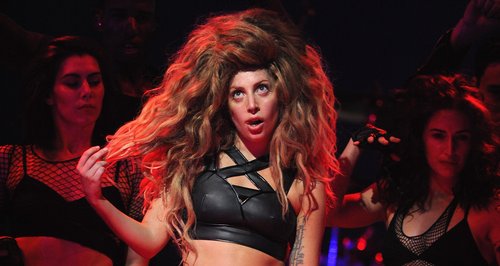 Join Capital as we run down all seven of the brand new songs Lady Gaga debuted from her album 'ARTPOP'.

Lady Gaga kicked off the month-long festival at Camden's Roundhouse in London on Sunday evening (1st September) and powered through performance of seven brand new songs from her album 'ARTPOP' as well as her explosive new single 'Applause' during an action-packed set that included numerous costume changes, high emotions and, most surprisingly, pig-costumed flying dancers.

Lady Gaga promised to treat fans to a host of new songs during her iTunes Festival opening slot and the Mother Monster didn't disappoint, performing only new songs during her lengthy set at the festival's highly anticipated first night much to the excitement of the hundred of screaming fans in attendance.

Ahead of the performance, she even told Capital that her set included the much-anticipated sequel to 'Telephone', her hit with Beyonce.

Join Capital at we take a closer look at the songs Lady Gaga debuted in full at iTunes Festival 2013 and what the fans are saying about each song on Twitter:

Lady Gaga kicked off her set with a performance of new song 'Aura', which set the tone for the entire evening with the US star's theatricality on full show as she performed the track suspended in mid-air in a human-sized cage. The song itself echoes a lot of the tracks on Gaga's latest studio outing 'Born This Way', but with a euphoric chorus not dissimilar to fan-favourite 'Dance In The Dark'.

Stand-out lyric: "Do you wanna peak underneath the covers? Do you wanna see the girl who lives behind the aura?"

After a quick wardrobe change the 'You & I' singer was straight back with another new song, 'MANiCURE' which showed off the full extend of Gaga's sassiness with an aggressive performance with a fist-thumping chorus that had the entire Roundhouse audience jumping up and down. "Put your f*****g hands up!" Gaga shouts at one point, and her hundreds of adoring fans did exactly what they were told.

The Mother Monster then changed into her new trademark outfit of an oversized blonde wig and shell bikini to launch into the titular track from her new album 'ARTPOP'. The song slows things down more akin to her past tracks like 'Paparazzi' and Gaga seemed to echo Blondie frontman Debbie Harry as she powered through the distinctly retro feeling song.

Stand-out lyric: "My heart can beat with bricks and strings, my artpop could mean anything"

Gaga completely changed the pace of her iTunes Festival set with this next track, which features guest spots from rappers T.I. (through an on-screen video) with Twista and Lil $hort. The hip-hop fuelled track showcases a new genre for the 'Marry The Night' singer, which proved a huge hit with the audience and, no doubt, a potential future single.

After a short break Gaga returned to the stage from behind a small egg to kick off the erotically themed 'Sex Dreams', with her song lyrics leaving little to the imagination. Heavy synths and 'Vogue' style dance moves will lead to inevitable Madonna comparisons… but since when has that been a bad thing?

Euphoria in the Camden Roundhouse was at an all time high when Gaga began her most performance-driven song of the evening 'Swine'. Beginning with a short prelude that saw her perform on a piano while dressed up in a pig mask, the US star was then joined by a troupe of dancers dressed up in pig suits suspended in the venue sky to huge cheers. The song itself sees Gaga at her most lyrically unusual and draws heavily on the pop singer's rock and dance music influences.

Things got heavy and emotional when Lady Gaga stepped back to perform piano-led ballad 'I Wanna Be With You', written after she suffered the hip injury that caused the premature end to her 'Born This Way Ball' tour earlier this year. Cheered on by the audience, a visibly moved Gaga showed off her incredible vocal talents with sky-high notes in a pitch perfect performance that rounded off all the new songs the star was debuting.

Stand-out lyric: "I'll keep on singing for living, but I wanna be in love, and I wanna be with you"

Listen to Lady Gaga's new song 'I Wanna Be With You' below:

Lady Gaga finished off her iTunes Festival 2013 set with a performance of her recent hit single 'Applause', the one song most in the audience knew off by heart, which made sure there wasn't a seat in the venue taken as everyone got to their feet for Gaga's send-off. The 'Telephone' singer thanked fans for taking her back into their arms and invited her crew and dancers onstage to celebrate the moment as her show drew to a close.

Stand-out lyric: "Give me that thing that I love, put your hands up, make 'em touch, touch"