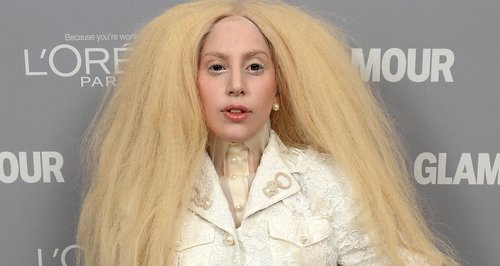 The 'Do What U Want' singer wore white powder make-up and a giant crimped wig for the event.

Lady Gaga shocked with another new look this week while attending the Glamour Women Of The Year Awards 2013.

After showing off a variety of outfits during her stay in the UK earlier this month Gaga continued to showcase her unique fashion style at the event.

The US star opted for a white skirt and matching blazer over the top of a high-collared blouse to attend the awards show, which she paired up with huge platform heels.

But it was Gaga's hair and make-up that drew the most attention, with a platinum blonde, crimped wig matched with white powdered make-up.

Check out a picture of Lady Gaga posing at the Glamour Women Of The Year Awards this week below (Credit: Getty):

The 'Do What U Want' singer was in a celebratory mood this week after launching 'ARTPOP' on Monday (11th November), alongside her album's special app.

View another show of Lady Gaga at the event below (Credit: Getty):

"Just chatted with monsters via the App while they're hearing the album for the first time. Ahhhhhh! I love ARTPOP!" Gaga tweeted yesterday.

Lady Gaga is set to play the second night of the Capital FM Jingle Bell Ball 2013 on 8th December.