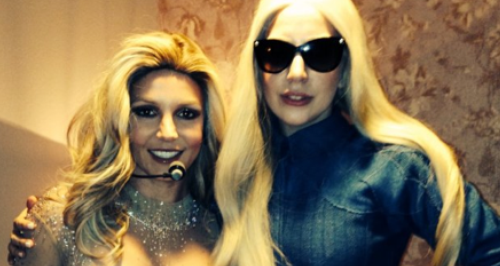 The 'Applause' star stopped by Planet Hollywood to celebrate Britney's residency in Vegas.

Lady Gaga stopped by Britney Spears' Las Vegas residency over the weekend to show her support to the 'Perfume' star.

The US star shared snaps of the pair enjoying the event on Saturday evening (1st February), as well as hanging out backstage after and enjoying a BBQ cooked by Britney's dad.

Earlier in the day Lady Gaga had posted up a picture of her outfit for the night before heading to Planet Hollywood to watch Britney's 'Piece Of Me' stage show.

@ladygaga Come hang before the show starts. Can't wait to see you :)

And Britney's dad gave us homeade BBQ, it was one of the best things I've ever eatin' in my LIFE.

Last week the two superstar tweeted each other about meeting up at the Vegas stage show, quickly sparking fan rumours the pair are planning a collaboration down the road.

Britney Spears' 'Piece Of Me' Las Vegas residency is expected to run across 50 shows for the next two years.