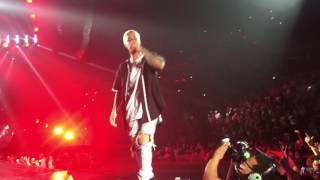 It's been a long six years. Maybe THE longest six years, since JB and Jaden Smith were together. But now the world just got a little bit better after their reunion.

Throw your minds back to when Jaden Smith didn't wear a Batsuit to a wedding; to when he didn't Tweet asking if trees were actually blue; and to a time when he was just a tiny youngster trying to make it in films like 'The Karate Kid'. This is when he formed his bromance with Justin Bieber.

During Biebs' 'Purpose Tour', JB got a sudden hit of nostalgia and decided to bring his life-long pal on stage with him at Madison Square Garden, and the pair belted out 'Never Say Never'.

The 18-year old clearly didn't forget a single step of his routine as he rapped along... And we couldn't be happier about it. This gives us EVERY SINGLE OUNCE of the feels. <3

After the show, Bieber posted a photo of the pair on Instagram, hugging, with the caption "Love you brother man", to which Will Smith's son then shared, saying "I Love You Big Bro Thank You.". Must. Not. Cry.