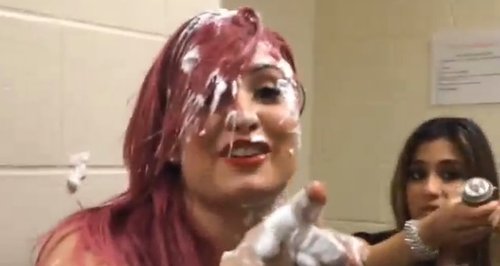 The 'Heart Attack' singer's tour support are left in hysterics after the trick.

Demi Lovato was left with pie on her face after her touring support act Fifth Harmony got her with a perfect prank.

The girls were all hanging out in the corridor and took Demi by surprise after initially sharing a compliment before whacking the pie into her face.

The former X Factor USA coach was left shell-shocked and told Dinaj Jane Hansen that her "ass was mine" the next time the pair met.

Demi was also seen last month pranking former tour support act Little Mix when she stepped on stage wearing a snowman costume during one of the songs.

The will commence once again on 22th April in Sao Paulo.