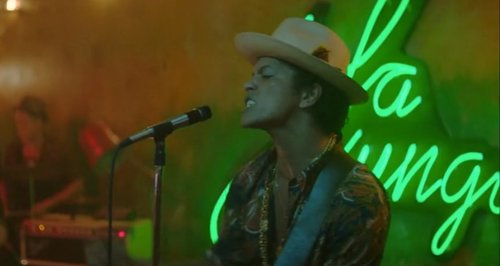 The 'Locked Out Of Heaven' singer gets hot 'n' steamy in his latest promo.

Bruno Mars gets hot and heavy with a beautiful female in his new video for latest single 'Gorilla'.

The singer also followed in the footsteps of Jay-Z by deciding to premiere the video on Facebook - rather than the traditional YouTube platform.

The track is taken from Bruno's second studio album 'Unorthodox Jukebox' and follows on from the likes of 'Locked Out Of Heaven', 'Treasure' and 'When I Was Your Man'.

The video sees an adult dancer, by the name of Isabella, take centre stage with Bruno and his band playing among scenes of fire, seduction and more.