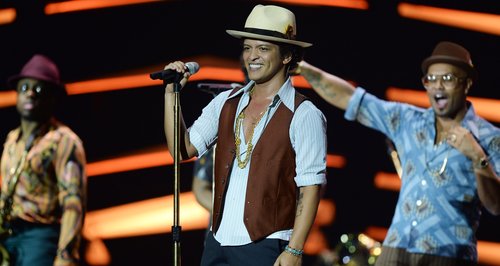 The 'Treasure' singer's live show was hailed as "amazing" by fellow singer Nathan Sykes in the audience.

Bruno Mars celebrated his birthday in London last night with a huge show at the O2 Arena, while The Wanted's Nathan Sykes was in the crowd to watch the "amazing" show.

The 'Locked Out Of Heaven' singer turned 28 yesterday (8th October) as he continued his 'Moonshine Jungle' UK tour across the UK, and thanked the UK crowds for showing him a "magical time" during the concert.

"LONDON!!! Prepare to celebrate the birth of thy young Mars at the O2 Arena tonight!! The Duke has arrived!" Bruno tweeted ahead of the big show, to support his recent album 'Unorthodox Jukebox', before adding: "Thank you London for making my birthday so magical. See you tomorrow. #MoonshineJungle."

Among the audience members for Bruno's big London birthday show on Tuesday was The Wanted star Nathan Sykes, who hailed the US star for his incredible voice after watching the live show.

"Had the most amazing time at @BrunoMars show tonight," Nathan tweeted. "His vocal ability is beyond incredible. I'm obsessed."

This week saw The Wanted announced their new 'Word Of Mouth' UK arena tour for 2014, with tickets going on sale from Saturday 12th October at 10am.