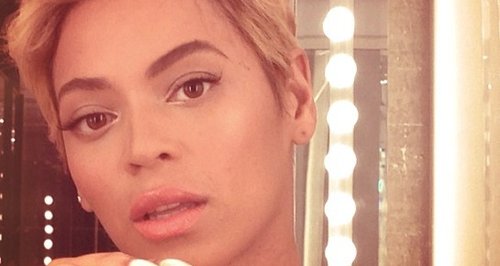 The 'Countdown' star is allegedly debating if she should wear a wig on stage for the festival appearance.

Beyonce is reportedly unsure about whether to perform with a wig or not this weekend at V Festival 2013.

The 'Love On Top' singer showed off a radical new look earlier this month (7th August) when she revealed she had chopped off her trademark long blonde looks.

Beyonce now wears her hair in a short cropped pixie-style haircut, but is said to be "worried" she won't feel her normal self when she performs without her long hair this weekend.

"She's asked her team to pack a suitcase full of 40 different wigs and hairpieces in case she bottles it at the last minute," a source told the Daily Star this week. "Bey's still adjusting to her new look and is worried she won't feel herself on stage."

Earlier this month Beyonce bought the North American leg of her 'The Mrs Carter Show' world tour to a close with a performance in Brooklyn, New York.

Beyonce is currently working hard on her fifth studio album which is expected out before the end of the year.