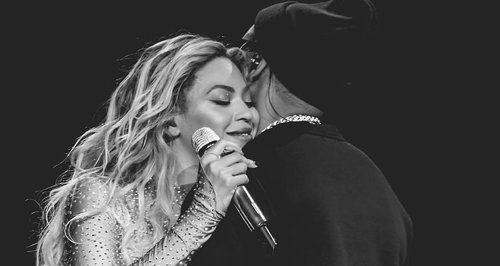 The 'XO' star's fans have taken to Twitter to thank Beyonce for all of the memories from her year-long tour.

Beyonce's mammoth world tour 'The Mrs. Carter Show' was brought to an incredible close this week, after an amazing 132 shows over the past year.

Since launching back in April last year the tour has travelled across North America, South America, Australia, New Zealand and even two legs in Europe, as well as being revamped in the wake of her launching self-titled album 'Beyonce' in December.

The US star finally ended the lengthy tour with an emotional show in Portugal this week (27th March), where she made a teary speech to fans thanking them for all of their support.

To mark the end of 'The Mrs. Carter Show' see what memories and pictures Beyonce's fans have been sharing across Twitter this week...

1. One member of the #BeyHive shares a truly emotional moment from his tour experience

@CapitalOfficial @Beyonce everything. but this has to top it all.. her holding my hand and singing to me pic.twitter.com/Smw9sIKDtr

Can't believe the tour has come to an end.. Thank you Beyonce for this amazing tour and the wonderful 5 nights I was able to witness

3. Was Portugal the greatest night on 'The Mrs. Carter Show' tour? What do you think?

I feel really honor that Beyonce decided to end the tour in Portugal! It was the best concert of the 132 shows!

4. This fan knows what's what... there's always more to come from Beyonce! #Preach

The tour is over but there's a lot more to come from Beyoncé this ain't the end, maybe album this year, have baby then tour next year

The tour is over, what's next? @Beyonce

6. Pretty sure Queen Bey DEFINITELY deserves a holiday after a year on the road

Can you imagine the holiday Beyonce is going to have now that her tour is over? We can only dream

@Beyonce thank you bey for giving us YOU and your time and talent.. And hopefully planning your next tour.. secretly wishing for more**

8. Sounds like Beyonce wasn't the ONLY one left in tears after her last show

Beyonce finished her tour tonight I feel like crying all over again thinking about it! #MrsCarterShow #queenb pic.twitter.com/ATEYhRRTtf

9. One member of the #BeyHive shares their love for Mrs. Carter

@Beyonce dear Bey, I saw u twice Mrs Carter show and was the best nights if my life, can't wait till your next tour.. I love you, thank you!

10. The end of this tweet is just as amazing as the start

Beyoncé crying at the last show of her Mrs. Carter Tour just made me cry. God, I need sleep

11. Think we can ALL agree the past twelve months have been incredible for Bey

Thank you for the great tour, @Beyonce! It has been a great year with so many emotions and experiences...We love YOU! <3

12. And now it's all over! But don't worry #BeyHive... we're sure she's got something up her sleeve

I just cried my eyes out watching Beyoncé talk during her last tour show in Lisbon tonight. Wow. Such a humble and beautiful spirit.