The 'Crazy In Love' star's fifth record will also be called 'Mrs. Carter' according to a leaked image posted online.

The 'Crazy In Love' star had previously confirmed a team-up with Justin Timberlake, which is also named in the list of tracks, with Jay-Z, Lady Gaga and her sister Solange also said to be confirmed team-ups.

Sia, Ne-Yo and Azealia Banks are also said to be collaborations featured on the new album, which is also set to be called 'Mrs. Carter'.

The tracklisting was handwritten on a notepad and "accidentally" posted online from Stargate – who were in the same studio where the 'Love On Top' star had been recording.

The picture was picked up by fansites of the Destiny's Child singer, which you can check out below: (Picture: BeyonceJournal) 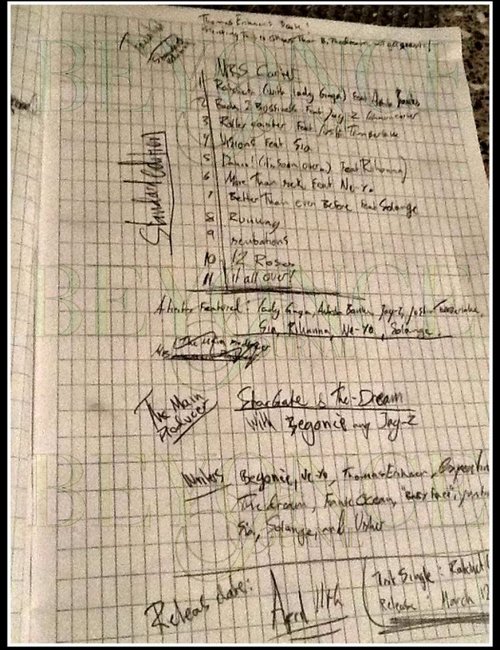 Check out the full rumoured tracklisting for Beyonce's new album below:

the album is also said to be penned in for a 11th April release – to tie in with her new 'Mrs. Carter Show' world tour.

The outing will include six nights at London's O2 Arena.