The 'Love On Top' singer was back on stage in Antwerp last night after suffering from exhaustion and dehydration.

Beyonce made her return to the stage for her 'The Mrs. Carter Show' tour last night (15th May) in Antwerp after cancelling a show the previous evening due to illness.

The 'Crazy In Love' star was forced to postpone her show on Tuesday by doctors who told her she was suffering from "exhaustion and dehydration".

The singer yesterday posted a hand-written apology to her fans for postponing her show and said she was back feeling fighting fit.

She also addressed her illness on stage and said: "Now, my doctors told me not to perform tonight, but there was no way in the world.

"I just have to say that you all have given me so much inspiration. And I just want to thank you guys."

Watch Beyonce speaking about her cancelled show in Belgium below:

The rumour mill also went into overdrive online with claims that the reason for the illness was that the Destiny's Child star was pregnant.

Such claims have since been denied by friends of the singer who told Us weekly that such talk is nonsense. 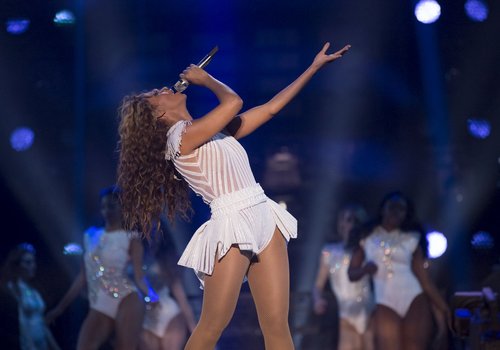 "Don't be silly," a source told the publication. "I know another kid is in the future but it wouldn't make sense for her right now while on tour."

The singer also recently spoke about her plans to extend her family and said she "definitely" wants to have more children with husband Jay-Z.