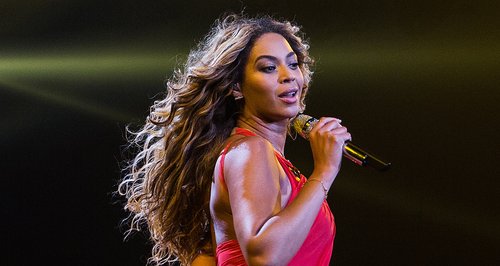 The 'Countdown' singer continued to perform as security tried to free her curls from the machine.

Beyonce had a lucky escape yesterday during her world tour show in Canada when her hair became caught in a giant fan during her performance.

The 'Love On Top' star's 'The Mrs. Carter Show' world tour arrived for a show in Montreal on Monday (22nd July), and Beyonce was performing her encore song 'Halo' when the incident occurred.

In fan-shot footage Beyonce is seen in the audience pit performing the ballad when her flowing curly hair becomes tied up in a big fan fixed to the arena floor, leading several security guards to rush to her aid.

The group of men fight to free the 'Countdown' singer's hair from the device while Beyonce acts like a true professional and continues to perform 'Halo' regardless.

Beyonce's 'The Mrs. Carter Show' tour is set to run up until December this year.

Check out a fan-shot video of Beyonce getting her hair caught in a fan below: