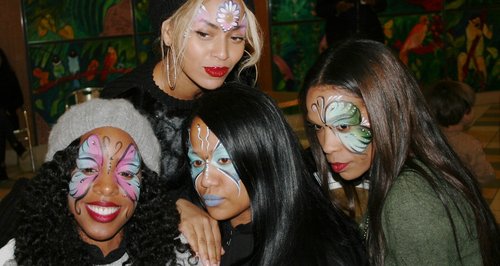 The 'XO' singer was joined by her former bandmates for Blue's big day last week.

Michelle Williams and Kelly Rowland were both on hand to help Beyonce and Jay-Z put on a memorable party to celebrate Blue's big day, even getting their faces painted for the occasion.

Check out a snap of Beyonce helping Blue Ivy celebrate her big day below (Credit: Beyonce.com):

In a series of brand new pictures shared on Beyonce's official website, the 'Drunk In Love' singer and daughter Blue are seen wearing matching tiaras as part of the celebrations.

Blue turned two years old last week (7th January), and her parents also took her to Miami Zoo for a day out as part of her birthday festivities.

Beyonce is set to kick off the second leg of her 'The Mrs. Carter Show' world tour in the UK later this year.