The 'Someone Like You' singer's producer says his recent remarks were taken out of context.

Adele's co-writer and producer Paul Epworth has denied recent claims that their James Bond 'Skyfall' theme took just ten minutes to record, stating his recent comments to Hollywoodlife were taken out of context.

The 'Rolling In The Deep' singer's musical partner took to Twitter this morning (18th December) to clarify reports saying it took a lot longer than ten minutes to "hone the track".

"Ok ok.. Can I clarify this.. Adele didn't record her final skyfall vocal in 10 minutes.. We cut the first draft of the verse and chorus," he tweeted, adding: "It took us a while to hone the track into the end result. Don't you just love it when things are taken out of context."

Adele confirmed that she had penned the James Bond track back in October following months of speculation.

She has also since received a Golden Globe nomination for the 2013 ceremony and has made a shortlist of contenders for next year's Oscars.

Adele with Paul Epworth at the Grammy Awards 2012 below: 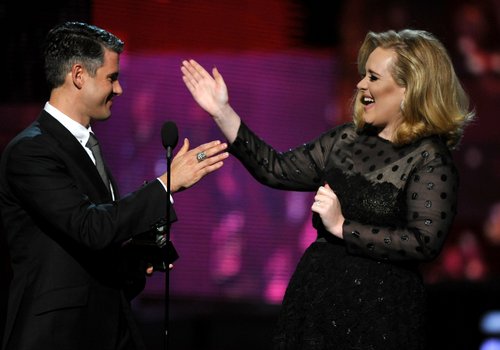 Adele's second studio album '21' was also recently announced as the top seller of 2012 on iTunes in the US for the second year in a row.

Meanwhile, the BRIT and Grammy award winning star has still yet to confirm reports that she has given birth, with the name of her child still a closely guarded secret.